—Not Based on Any Other Translations—

Toward a Raw Translation of God's Writs 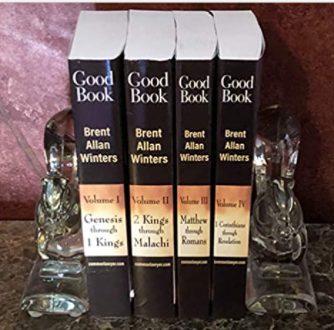 In appreciation of a suggested donation (or more):

Brent is recording himself reading aloud the Good Book Uncooked...all 66 books. Each completed audio book of the Bible will be available as a download for a donation of $1 or more. You will find the list of available audio books of the Bible here. We will update this list as Brent makes each audio chapter available for listening.

God’s Kingdom of Law -vs- Men’s Empires of Evil

Brent's translation of the Bible is the result of 40 years' work, the last 10 of which he read and worked with the Bible only in its original tongues, in order to better accustom his mind to those tongues and their authors' intent.

The purpose of the Good Book Uncooked, however, is neither for mass appeal and sales, nor to overcome other translations; but rather, first, to provide its translator with a ready text and notes from which to teach; second, to show that the Bible is the very best law book we have. (People v. Boyd, 311 N.C. 408, 319 S.E.2d 189, 199 (1984) (finding that these words of the prosecutor to the Jury are no justification for reversal of the verdict)).

The foundation of a country’s law and government, writes Brent, lies in its sense of deity—whether false or true. And one discerns a country’s sense of deity by discovering to whom a critical mass of its members attributes final, non-appealable power to decide right from wrong in individual cases; such determinations are law. From time out of memory, men have called such a person, thing, or combination of persons or things with power of a single will "a lawgiver" and "a god". Throughout man's history, including the history the Bible records, a person's—or a nation's—lawgiver is their god. Thus it is said, show me your lawgiver, and I will show you your God.

A lawgiver is often one’s self, another person, the majority of a group of men such as a legislature or court panel, or the true God. If, however, this foundation is other than the Maker of skies and land and all that is in these, it is idolatry: the spawning bed of priestcraft and its ever-present handmaiden called statecraft. No person or country can be any stronger than its god.

There is no avoiding the decision; each American shall choose his god, his final arbiter of right and wrong. Simply put, his choices are only two: he will decide the government of the laws of Nature and of Nature's God, or a government of men; either freedom or slavery; life or death. By his choice, he and his country will evermore tend toward the one or the other.

Moreover, a person or country will become more-and-more like its god. Thus, for a country to identify itself in a man or party of mere men is to suffer the fate of that man or combination of men. Indeed, the Romans said that the voice of the people is the voice of god; therefore, when the people spoke false or no longer cared enough to speak at all, Rome crumbled. Likewise, the French people cried to Napoleon, You are France, and France is you; thus, when Napoleon fell at Waterloo, all France fell with him.

A truly massive and magnificent work for the benefit of the world.

Mr. Winters notes in the Good Book about unity and soul are stunningly brilliant I... want you to know how valuable I am finding the Good Book to be and am learning what the Bible really says with Mr. Winters good teaching.

Brent's translation is frank; no frills.

I highly recommend studying Brent’s translation of the Bible. The footnotes are like diamonds!

Mr. Winters’s notes in the Good Book about unity and soul are stunningly brilliant. I...want you to know how valuable I am finding the Good Book to be; and I am learning what the Bible really says with Mr. Winters good teaching.

Translates the Bible from its original Hebrew, Aramaic, and Greek tongues

—Unpacking the text of the Bible’s original tongues

—Describing over 800 U.S. court opinions that use the Bible for support

—Unpacking common-law first-principles from the Bible

—Tracking our common law woven through the Bible

The users of this Bible translation and notes are those groups now requesting it: Bible teachers, expositors, students;Christian schools, law schools, home-school parents; lawyers, judges, and Jurors, wanting to learn, teach, and follow law within the Bible’s standards. Using radio and internet platforms, Brent teaches daily from his annotated Bible translation, and weekly teaches law-school classes using it. Upon his students’ and listeners’ individual requests, he prints and ships his annotated Bible translation throughout the United States and the world. Pages: 3000; sheets: 1500.

Brent Allan Winters is a practicing lawyer and pastor. He grew up on a farm in southeast Illinois, served as a commissioned U.S. armed-forces chaplain, dive-team member of U.S. Navy Diving Unit One, and aboard carrier USS Coral Sea. After military service, Brent worked as a mining geologist, then pastored, while farming and raising livestock. He later ran for U.S. Congress, general election. Brent has tried cases in State court and federal court before the Jury, argued before State and federal appellate courts, and clerked for a State appellate judge. Brent and his wife of 45 years have raised eight children.